The problem - Client Site Conditions:  A single-suite data center in a large metropolitan collocation facility perceived that its CRAC units were cooling inefficiently, but were not sure why or how to resolve the situation. This particular data center had an odd shape with three CRAC units cooling the space via a pressurized raised floor. Two of the units were on the perimeter walls and one was in the middle of the room.  CEG was called into to assess the environment and provide options. Our engineers determined that a majority of the hot return air was being cooled by only one CRAC unit with very little making its way back to the other two. This inefficiency resulted in a balancing issue as noted return air temperatures on two of the units were only in the mid-to-high 70s, while the unit loaded the lightest had a return air temperature of just 68 degrees.

CEG’s Recommendation: CEG suggested an engineered containment solution that simultaneously addressed the environment both above and below the raised floor. The under-floor portion enabled more of the supply air to be directed to the higher density areas in the data center. And by creating a more direct path for the hot air return above the raised floor, the solution enabled a more even and better balanced workload across all three CRAC units. 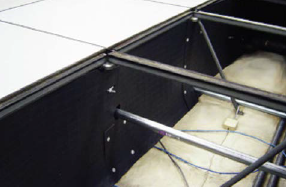 The CEG Solution: CEG designed a solution specifically for this environment, featuring air diverter panels and fire-retardant foam for use under the raised floor and custom-designed barrier panels for use above the raised floor.

Plenaform™ Baffles and Polardam™ Foam were used to better channel the supply air below the raised floor. These products blocked off unused raised floor areas and channeled the air more directly to the perforated floor tiles. Supply air delivery was additionally optimized by removing the baffles in some of the perforated tiles and relocating the tiles to more efficient locations. 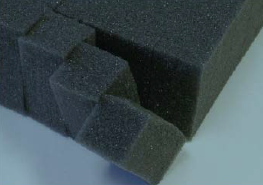 CEG’s engineering team also custom-built free-standing barrier panels for use above the raised floor to help contain the supply air, as well as provide a more direct and evenly distributed hot air return path to the CRAC units. These panels also prevented cold air from being lost at the end of the cold aisles.

Additional above-floor optimization was achieved by adding blanking panels to the open U spaces in the racks to block off cold air being lost through the racks. Finally, CEG placed barrier panels on the top/rear of the higher-density racks to keep the hot return air from spilling over the top of the racks and back into adjacent cold aisles. 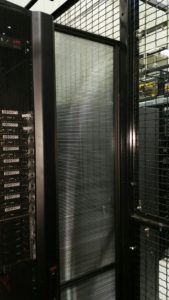 Results: The combination of the subfloor and above floor solutions, along with added optimization steps resulted in a noticeable increase in the return-air temperatures of all three CRAC units. Return air temperatures increased by roughly six degrees on the two under-utilized units and nearly five degrees on the more heavily loaded unit. The solution also more properly balanced the loads being cooled by each unit. Since implementation, the client has reported a noticeable increase in the quantity and velocity of the cold supply air being delivered to the critical loads. There is now a clear and noticeable delineation between the supply air and return air as most all the mixing has been eliminated.

In addition to achieving airflow improvements, the client may realize a cost savings anywhere between 20-30 percent thanks to CEG’s comprehensive assessment and custom-engineered optimization solutions. Our critical environment experts are always available to discuss your airflow issues and help you make informed decisions. Contact us at info@criticaleg.com or 800.257.5235.